Update 3-16-2015: Sig has released a chart to help illustrate the difference between the P320 Carry and P320 Compact. 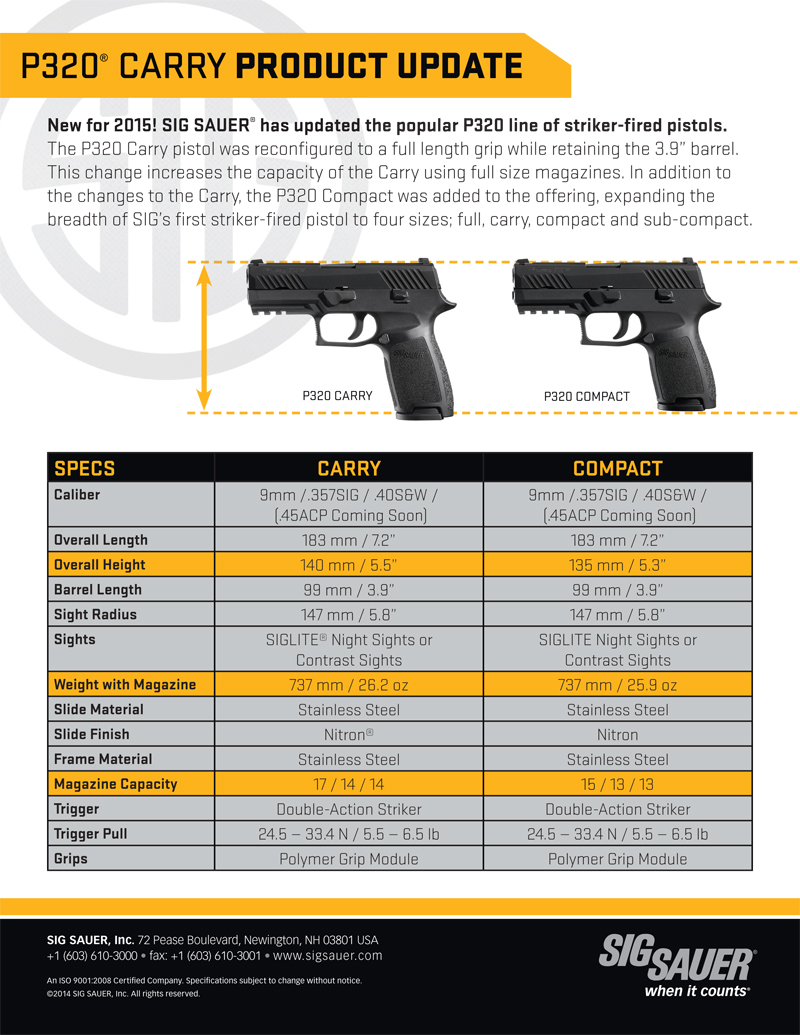 So… back when we posted our video detailing the P320 and P250, we pointed out that it was strange that the P250 Compact was the same as the P320 Carry in overall dimensions. Well… it seems that this is turning into a real cluster.

The gun that we have all known as the P320 Carry is no longer the Carry… What, what?

Yup, the gun initially branded as the P320 Carry, including their micro site (still as of this post), calls out the Carry as having a 3.9″ barrel and overall height of 5.3″. That meets up to the P250 Compact.

Now, they’ve made a new Carry and the old Carry is now the Compact (making it the same size as the P250 Compact).

See screenshots below from SigEvolution.com showing the P320 line as of 2014 which means the P320 Carry specs will be incorrect in 2015:

And then see the screenshots from SigSauer.com:

The 2015 Carry has a full height grip shell allowing for full size magazines (uh oh, that means mag size confusion to follow). It has a 3.9″ barrel and that makes the barrel / slide the same length as the 2014 Carry but it is taller (the same height as the full size).

You will also notice from the photos below that the grip shell is essentially a full size grip shell cut back to the length of the slide.

The 2014 P320 Carry has the same size grip shell as the P250 Compact along with a compact magazine.

Because there are tons of websites, YouTube videos (including ours), and photos calling out the 2014 version it will be extremely confusing when you’re shopping for one. If you are in the market for a P320 Carry or P320 Compact, you should probably verify the exact dimensions to be 100% sure you know what you’re going to get.

We will be updating our products as soon as possible so that the names reflect the 2015 Specs.

Adding to the confusion of the naming scheme change, you’ll need to pay close attention when ordering magazines or grip shells.

We can assume that Sig will introduce another grip shell matching the 2015 Carry grip shell so that those with a 2014 Carry can convert their pistol (or you can use a MAG-MOD-C-9-17-X / MAG-250C-9-17-X which is a full size mag with an X-Grip adapter closing the gap).

We will try to make a new video in the near future explaining these changes in detail and we will try to illustrate the correct mags for each pistol variation.

This is confusing stuff. Do you still have questions? Leave a comment below!

17 thoughts on “The P320 Naming Scheme is going to cause Headaches!”