We just shared some exciting news we received on the release of Sig’s P365 XL but that isn’t the only new pistol coming out!

Sig Sauer also shared news that the next variant in the Legion is the Sig P320 X5. At a quick glance, I’d say it fits perfectly in the Legion series and looks incredible!

What you can’t see in the photo is that this new XFIVE Legion weighs much more than current P320 X5 pistols by a whopping 7.9 ounces (it weighs 43.5 ounces). They accomplished this increase in weight by infusing Tungsten into the grip module. Sig is calling it a TXG Tungsten infused heavy XGrip module.

Since we aren’t expecting to get an all metal grip module, this is definitely the next best thing! To put it into perspective, Walther’s new Q5 Match Steel frame pistol weighs 41.6 oz empty. A P226 X5 Tactical weighs approximately 35.5 oz and a P220 10mm Legion weighs 44 oz so this is just a half ounce lighter.

The X5 Legion will be offered in high capacity and 10rd (AKA the I live in a liberal state version) variant. The high capacity magazine will hold 17 rounds and the base pads are aluminum. The other P320 mags. (17rd and 21rd) should work as well since the height hasn’t changed.

Below is the sell sheet on the X5 Legion. We’re waiting on additional information for delivery / timing and availability. You can order (when available) and sign up for email notifications for the P320 X5 Legion on our store page.

View all of our current Legion inventory.

NEWINGTON, N.H., (July 1, 2019) – SIG SAUER, Inc. is pleased to introduce ground-breaking innovation to the P320 pistol, and the expansion of the SIG SAUER Legion Series of pistols with the SIG SAUER P320 XFIVE Legion. The pistol features the exclusive TXG grip module developed by SIG SAUER engineers with a patent-pending process by infusing tungsten into the polymer material providing the weight of steel with the flex of polymer. Additionally, this is the first striker-fired pistol to be introduced to the Legion Series of pistols. 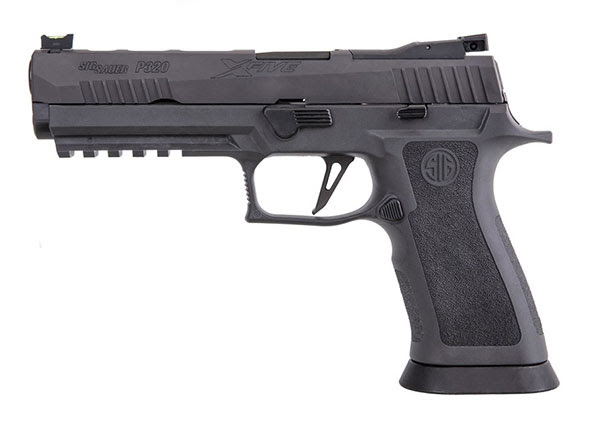 “We are really excited about the introduction of the SIG SAUER P320 XFIVE Legion to the market because it embodies the forward-thinking SIG SAUER mindset when it comes to product development,” said Tom Taylor, Chief Marketing Officer and Executive Vice President, Commercial Sales, SIG SAUER, Inc.  “The P320 XFIVE Legion is defining innovation and changing the game for competition pistols, and it’s these exclusive features that are designed to enhance the shooting experience that our Legion members have come to expect from us.  The grip module is heavier, substantially reducing felt recoil and muzzle flip, and the newly developed trigger reduces pull weight by up to 30% for a crisp, fast shooting experience – and that’s just the start.”

The SIG SAUER P320 XFIVE is a 9mm striker-fired pistol, with the TXG tungsten infused heavy XGrip module, a Legion Gray PVD Slide with lightening cuts, 5” match grade bull barrel, and a lightened and skeletonized trigger.  The recoil assembly of the P320 XFIVE Legion has been upgraded to include a one-piece stainless steel guide rod and a 14lb. 1911-style spring, plus an extra 12lb. spring, allowing the end user to easily adjust the recoil spring for a customized shooting experience.  The pistol comes optic ready and is compatible with a SIG SAUER Electro-Optics ROMEO1PRO Optic or a standard DeltaPoint Pro Optic, features Dawson Precision® Fiber Optic front and adjustable rear sights, and comes with three 17-round magazines with anodized aluminum Henning Group base pads.

About SIG SAUER, Inc.
SIG SAUER, Inc. is a leading provider and manufacturer of firearms, electro-optics, ammunition, airguns, suppressors, and training. For over 100 years SIG SAUER, Inc. has evolved, and thrived, by blending American ingenuity, German engineering, and Swiss precision. Today, SIG SAUER is synonymous with industry-leading quality and innovation which has made it the brand of choice amongst the U.S. Military, the global defense community, law enforcement, competitive shooters, hunters, and responsible citizens. Additionally, SIG SAUER is the premier provider of elite firearms instruction and tactical training at the SIG SAUER Academy – a world class, state-of-the-art, 140-acre training facility. SIG SAUER is headquartered in Newington, New Hampshire, and has more than 1,700 employees across eight locations, and is the largest member of a worldwide business group that includes SIG SAUER GmbH & Co. KG in Germany. For more information about the company and product line visit: sigsauer.com.

Update 8-20-2019: The P320 X5 Legion Grips are now available separately from the firearms. We have them in stock as of this update. Two part numbers are available: