I don’t need to say too much. Check out this very well produced video introducing Sig’s new suppressor line.

Sig has started shipping the MPX pistol with stabilizing brace. The MPX was originally announced well over a year ago. The MPX is a great platform with modularity allowing caliber changes. END_OF_DOCUMENT_TOKEN_TO_BE_REPLACED

FNH-USA just released news on their new civilian legal M249S model which is a semi-auto version of the military M249.

Here is the video from Truth about Guns:

The press release is as follows:

We are standing at the FNH USA booth here at the NRA show before the doors even open to get the scoop on some cool new guns being announced that have never even been rumored to exist. New for 2015, FN is releasing semi auto versions of all their military firearms including as-issued M4, M16, and even a true blue M249. Yes, really! Presser (AND VIDEO!) after the jump. . .

(McLean, VA – April 10, 2015) FNH USA is excited to announce that three new products, including a brand-new product line, will be making their first appearance on the FNH USA Booth #2324 at the 2015 NRA Annual Meetings in Nashville, TN. Expected to be released in the Fall of 2015 are the mil-spec FN M249S™, a semi-automatic version of the U.S. Military’s M249 SAW light machinegun and two new additions to the company’s modern sporting rifle line, the FN 15™ M4 and M16 Military Collector Series.

“FNH USA has a unique history of commercializing and releasing to U.S. firearms buyers products that were originally developed for military or tactical applications,” said Mark Cherpes, President and CEO of FN America, LLC. “We are proud to continue that tradition with the introduction of the FN 15™ Military Collector Series and the semi-auto FN M249S™.”

The FN M249S, a semi-automatic version of the M249 SAW light machinegun, was originally developed by FN Herstal as the FN MINIMI® and adopted by the U.S. Military in 1988. The rifle features the signature 20.5-inch FN cold hammer-forged, chrome-lined barrel and operates from a closed bolt position. Chambered in 5.56x45mm NATO, the rifle will accept both magazine and linked ammunition belt and offers a 4.5-6.5 pound trigger pull out-of-the-box.

To learn more about FN America, LLC and FNH USA branded products, visit us at booth 2324 at the 2015 NRA Annual Meetings and Exhibits or visit www.fnhusa.com.

FN America, LLC, is a U.S. subsidiary of FN Herstal, S.A., a global leader in the development and manufacturing of high quality, reliable firearms for military, law enforcement and commercial customers worldwide. Headquartered in McLean, VA with manufacturing operations in Columbia, SC, FN America is passionately committed to providing its customers with a portfolio of products, training and support services under the FNH USA brand name that enhance their performance and safeguard their lives. For more information, visit us at www.fnhusa.com or follow us on Facebook, Twitter and Instagram.

Back in December we reported that Sig had discontinued stand along PSB sales. This was a serious annoyance to dealers and consumers because many don’t want the pre-packged kit (which included the buffer tube, buffer, spring, and the brace itself) because they either had the parts or wanted to use less expensive parts.

It seems that the backlash or lack of sales on the new kits has caused Sig to recant and roll back the change. Braces are once again available without having to buy a kit.

Additionally the braces are available in six configurations

We have been begging Sig to notify dealers and consumers when they make running changes to features on various firearms they offer. It can be confusing to track changes when dealing with large quantities of each model.

Someone must be listening because Sig recently notified us of a running design change to the P239 line. Effective 3/1/15 all P239 pistols that come with the black two piece grips will ship with the Hogue one piece wrap around grip.

It appears that this effects all P239 models with the exception of the Scorpion. 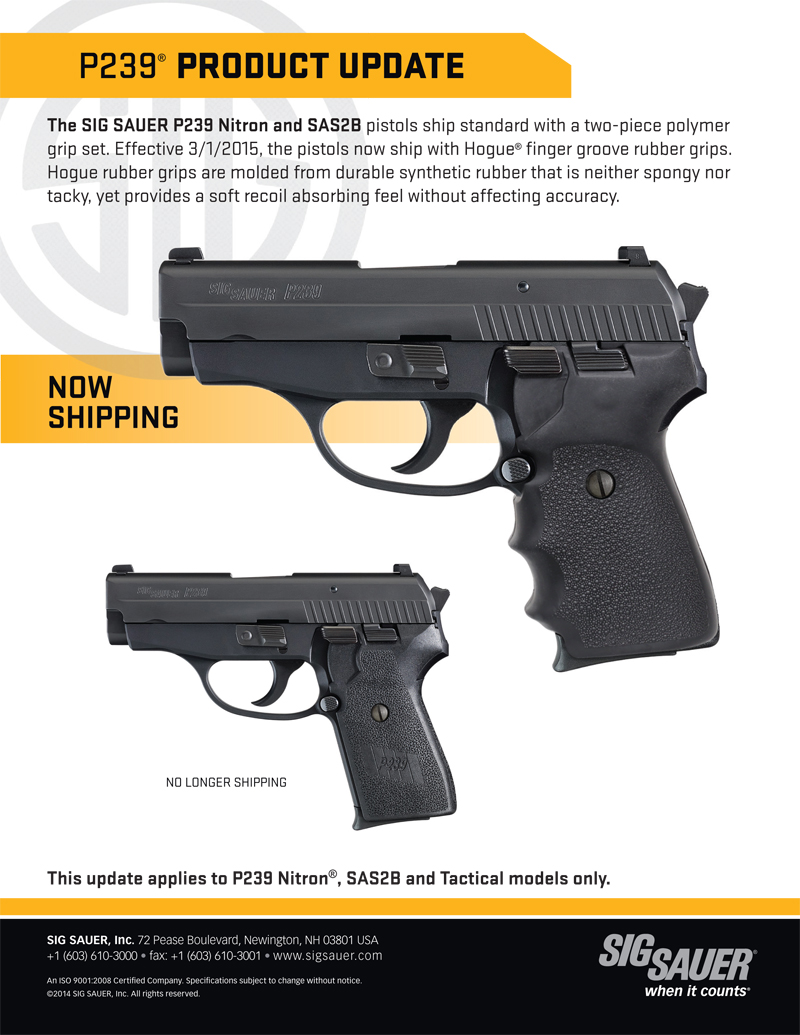 Below is a quick video of Sig’s MCX which we were able to demo at Sig’s Range Day event at SHOT Show 2015.

The MCX is a very modular rifle offering the ability for the end user to change calibers (with a barrel / bolt swap), handguard, and stock easily. The upper can be installed on a mil-spec AR-15 lower and doesn’t require a buffer or buffer spring and this allows for the flexibility in folding / telescoping stocks.

We had the pleasure of shooting a few of Sig Sauer’s new suppressors at SHOT Show 2015 and compiled a short video of the suppressors in action. Enjoy!

We heard some chatter at SHOT Show regarding a few more of Sig’s handguns being discontinued due to the Germany export situation. Initially we understood that the Mosquito and 1911-22 line were both going to be discontinued since they were made in Germany. END_OF_DOCUMENT_TOKEN_TO_BE_REPLACED

Below are some additional videos from our visit to Sig Sauer’s Range Day event at SHOT Show 2015.